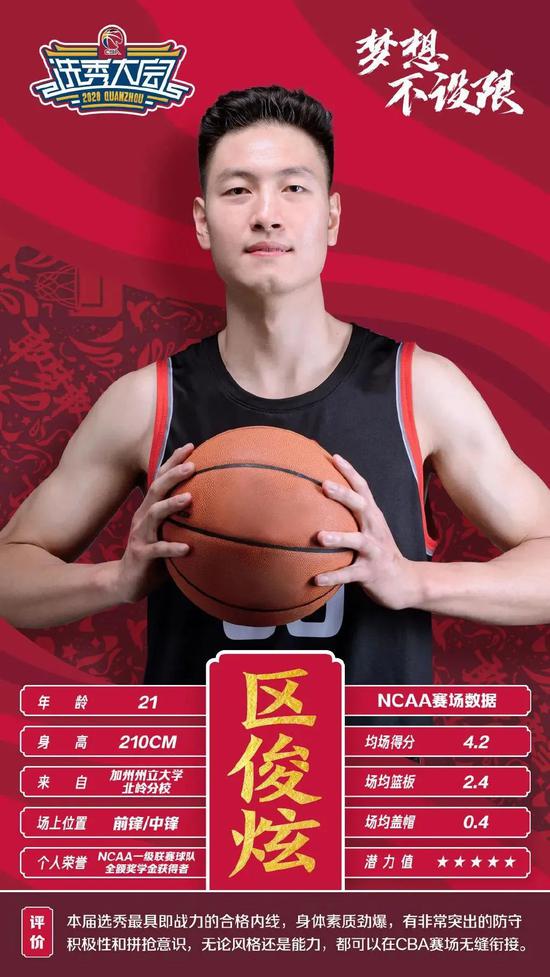 On the evening of October 22, Beijing time, CBA ushered in a rookie focus battle. The champion district Junxuan is in Shanghai, and the No. 4 show Zhu Songwei is in Sichuan. Due to injury issues, Ou Junxuan had not played before, and it was not until this game that he ushered in his CBA debut. Ou Junxuan studied at California State University Northridge and is the best inside player among rookies this year!

Zhu Songwei is nicknamed "Shantou Durant". He is 2.05 meters tall and weighs 103kg. Zhu Songwei is one of the best strikers in CUBA, with very comprehensive skills. He averaged 19.6 points, 7.6 rebounds, 2.8 assists, 1.8 blocks and 1.2 steals per game last season, filling all the data columns! However, Zhu Songwei played very poorly in his CBA debut. He made 1 of 7 shots and only scored 5 points, 3 assists and 1 rebound, plus 2 turnovers. This scene was also Zhu Songwei's second appearance against the Shanghai Men's Basketball Team.

Welcome to CBA! In the face of Su Ruoyu, Ou Junxuan scored 2+1 in the basket and scored his first goal in his career. He played only 4 minutes in the first half, scoring 3 points and 2 rebounds on 1 of 3 shots.

Looking at Zhu Songwei on the opposite side, he played 19 minutes in the first two quarters and easily scored 13 points on 5 of 9 shots, which was also the highest score of the Sichuan team. The shooting movement is elegant, and it is indeed a bit like Durant. This No. 4 show is going to grab the top spot!

Don’t look at Zhu Songwei's data, but Sichuan team trailed by 13 points at halftime. Two foreign aids Fredette and Deng Meng scored 18 points together, Kolambek scored 4 three-pointers and scored 14 points. From the lineup point of view, the Shanghai Men's Basketball Team is clearly the more dominant team. During the offseason this year, they introduced a number of domestic players: Kelan Beike, Liu Zheng, Zongzan, He Zhongda, Gao Shang and Wang Xu. After Kelan came, he became the new captain of the team!

may have just returned from injury, Ou Junxuan had no chance to play the game. Of course, it may also be that Dong Hanlin and Zong Zan performed well in this field, and it is difficult for the No. 1 pick to gain the trust of the coach. Dong Hanlin made 5 of 5 shots and scored 11 points and 12 rebounds. He also dedicated a wonderful dunk!

Many fans asked: Is the Shanghai Men's Basketball team missing a big center? That's right! According to previous reports, Zhang Zhaoxu will miss the first stage of the game due to a waist injury. When Zhang Zhaoxu returns from injury, Ou Junxuan may have fewer opportunities.

I thought it was Ou Junxuan fighting Zhu Songwei, but I didn't expect the two of them to be present at the same time. The CBA rookies are different from the NBA in that they have much less playing time and performance opportunities. Most of the young players on the team come from their own youth training system, so they don't trust the rookies from CUBA.

To tell the truth, this game is pretty mediocre. At the last moment of the fourth quarter, it was completely garbage time, and Ou Junxuan went back into battle. As soon as he played, he was beaten 2+1 by Yuan Tangwen. Ou Junxuan was also very upset and sighed. In the end, the Shanghai team defeated Sichuan 102 to 90. Ou Junxuan played 8 minutes and scored 3 points, 3 rebounds, 0 assists, 2 turnovers and 2 fouls on 1 of 4 shots.

Zhu Songwei played 27 minutes, scored 20 points, 2 rebounds and 2 assists on 7 of 14 shots, the highest score in the game! Some fans said: The No. 1 pick hit the rookie wall in the first game. To be honest, a game may not represent much, but it is not that simple for Ou Junxuan to gain a foothold in the Shanghai team.

The days ahead are still long, young people must continue to improve themselves!